Really, given how many books I’m reading at one time, I can hardly have too many bookmarks.

It was easier to make the bookmark than to take its picture. Today’s been cloudy, which doesn’t give me good light for photography, and to take a picture this close up, I probably should use the tripod (and didn’t). So it’s a little hard to see the elements on the charm, but clockwise from upper left, they’re Water, Air, Earth, and Fire. Pair the charm with a few Swarovski crystals, and ta-da! A fun little quickie project.

Not only did I pick up the instructions to the Beadstrology necklace, I got the instructions for the bookmark as well. Now I’m not sure how practical this bookmark will be, since its “tassel” is longer and heavier than the bookmark itself, but it was fun to make. Maybe I can use it as decoration if nothing else. I am resisting making the Goddesses bracelet. (For the curious, that’s a bracelet featuring beads for the prominent asteroids in your chart—named for Roman goddesses—rather than the planets which are mostly named after gods.)

Unlike the necklace, the bookmark runs straight from the first house through the twelfth. With the bookmark part basically taking the place of the Ascendant, there’s no bead for it. The bookmark starts with Venus, the only planet in my first house, and runs from there. 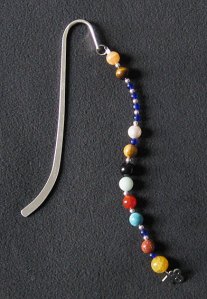 The stones are almost the same as for the necklace. The difference is that Pluto is made out of hyperstein, since I had no other zebra jade beads that dark. It’s a little difficult to see the charm at the end of the bookmark because of the way it’s angled, but it’s the glyph for Capricorn.